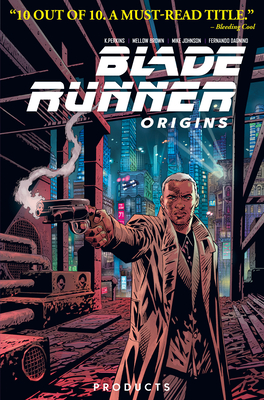 
On Our Shelves Now. Click on title for location specific availability.
Travel to the world of Blade Runner 2009 and discover the origins of the BLADE RUNNER DIVISION.

When a Tyrell Corporation scientist working on an experimental new type of Replicant is discovered dead in her laboratory, the victim of an apparent suicide, LAPD detective CAL MOREAU is called in to investigate. What he uncovers is a conspiracy of silence so deadly it could change the world as he knows it. Set ten years before the events of the first Blade Runner film, this is the world on the cusp of environmental collapse, and the beginning of the mass Off-world migration to the Off-world colonies. Through its rain-soaked streets, LAPD Detective CAL MOREAU, a PTSD sufferer, must travel as he attempts to unravel the truth behind a seemingly routine suicide that soon reveals itself to be just the thin end of a vast conspiracy, one that runs to the very top of the Tyrell Corporation tower.
K.Perkins has written extensively for DC Comics on Batwoman, Wonder Woman and Supergirl and has worked with Mike Johnson on The New 52. She has also written for several TV shows.

Mellow Brown has as written for several TV shows including American Gods and Calls.

Mike Johnson is a prolific comic book writer with credits writing Titans, Superman, Batman, Star Trek: Nero and Star Trek: The Official Motion. He is the ongoing writer of the IDW Star Trek series, as well as comic book tie-ins to Fringe, Transformers.

Fernando Dagnino is a Spanish penciller, inker and cover artist with over 75 credits to his name. He has worked for Marvel, DC and IDW comics. He has previously worked with Mike Johnson on the IDW Star Trek comic series. His credits include: Infinite Crisis, Earth 2, Star Trek/Green Lantern, Arrow, Justice League, Suicide Squad, Captain America and the Incredible Hulk.
“a series that perfectly captures the spirit of the Blade Runner universe while presenting a unique narrative” - Comic Book Resources

"continues to flesh out the Blade Runner universe, adding further layers to its protagonist and setting up a new mystery." - But Why Tho

"Beautifully done ... demonstrates with potent skill that Blade Runner 2029 will stand definitively in its own right" - Set The Tape

"Gives Blade Runner an upgrade like no other" - DC Comics News

“Los Angeles in 2009 is proving just as lethal as Deckard’s 2019, and we just can’t get enough of this retro futuristic dystopia” - Sci-Fi Bulletin

“a bold and ambitious approach … combining trans identity in the LGBTQ sense with transhumanism.” - AIPT Comics