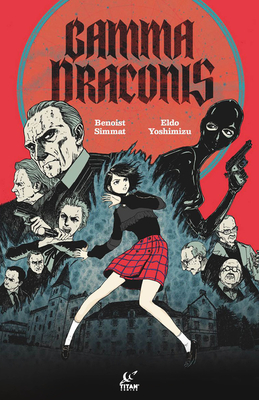 
On Our Shelves Now. Click on title for location specific availability.
Eldo Yoshimizu, the creator of the epic Yakuza Manga, Ryuko, teams up with Benoist Simmat to create another dazzling crime tale.

Aiko Moriyama studied religious art at the Sorbonne, but her research in occultism quickly led her down a dangerous path. When several experts around her come under attack from a mysterious entity rising from the depths of the web, she finds herself embroiled in a police investigation involving the sinister leader of an international organization. From London to Tokyo, between transhumanism and black magic, Aiko is determined to solve the enigma of Gamma Draconis and to discover how exactly her family is involved...
Benoist Simmat is a journalist, essayist, and scriptwriter, and the author of thirty books. A wine specialist, he is a long-time contributor to La Revue du vin de France.

Eldo Yoshimizu was born in 1965 in Tokyo. Having specialized in sculpture while studying at the University of Arts in Tokyo, he has installed numerous works in public space - some of them are among the most significant sculptures in Japan. Exhibitions in Japan as well as throughout Asia and in New York prove his international success and led him in 1994 to a scholarship as "Artist in Residence" in New York. In 2003 he realized the work »First Light« for the art and exhibition space of the Louis Vuitton branch in Omotesando. With the feeling of having satisfied his hunger in the field of contemporary fine art, he turned to Gekigaand began to focus on the interplay of object and space in the art of storytelling. He also works as a photographer and as a musician.
“Occultist history, dark conspiracies, and dramatic fight sequences intertwine in this multinational thriller-manga” - Publishers Weekly

“a masterful blend of manga and western aesthetics that is entertaining and thought-provoking.” - ​​Samarchar Central


“It has intrigue, corruption, mystery, black magic and a search for eternal life.” - Comic Buzz