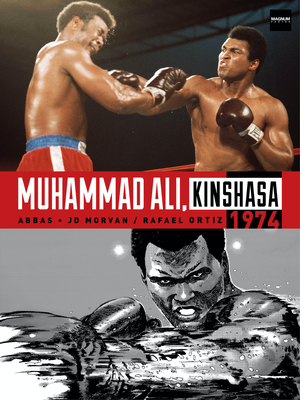 "The drawings and photos allow us to revel in the imagery and history of that unforgettable night, and the torrid pace of the storytelling, the many flashbacks allow us to see the full context of the fight" - The Ring

On the 30 th October 1974, the most famous boxing match of the 20 th Century took place. Nicknamed the "Rumble in the Jungle", it pitted Muhammad Ali, desperate to win back his world champion belt, and George Foreman, the current holder, against each other. Foreman had just KO'd the only two boxers to have ever beaten Ali. By his own admission, Ali was terrified of facing him in the ring...

Now, the photojournalist Abbas immortalises this legendary meeting, having kept his photos in his personal archives for 36 years before unveiling them to the world. In a cross between a documentary, photo report and graphic novel, this book reveals the context of the most powerful photographs taken by one of the greatest photographers of the Magnum Photos agency. Enriched by the testimony of Abbas himself, Jean-David Morvan's script is rigorously brought to life by artist Rafael Ortiz.

"[A] gritty, action-packed hybrid work of photography and comics art ... lands plenty of punches" - Publishers Weekly
Jean-Davide Morvan started out as a comics artist before realising his masterful talent for storytelling. Born in France, he studied art at the Instiut St Luc in Brussels. In 2004, he became the writer of classic Franco-Belgian comic, Spirou & Fantasio. Over the years he has produced over 230 comics, winning multiple awards including the Youth Award in 2006 at Angouleme International Comics Festival, and Best Story in 2008 at Prix Saint-Michel.

Abbas is a world renowned photographer, originally from Iran. He dedicated a lot of his work to political and social coverage of developing southern nations, and from 1970 onwards, many of his works appeared in magazines across the world. After capturing the Iranian revolution, he self-exiled for 17 years before returning. One of his most controversial subjects has been religion, extensively documenting different faiths, from Islam to Buddhism, with accompanying essays. He has produced many books of his photographic works and has held exhibitions all over the globe. In 1981 he joined Magnum Photography Agency and was a governing member until he died in 2018.

Rafael Ortiz is an Argentinian cartoonist whose work includes Dan the Unharmable (Panini Comics), God is Dead (Avatar Press). He collaborated with the screenwriter Jean-Davide Morvan on a biography of Mao Zedong (Glénat). In 2018, Rafael worked with screenwriter Frédéric Richaud on l'Envers des Nuages (Glénat), a fictitious account of the red cross involved in African conflicts. In 2019, he began working with The Tribe, on graphic novels such as The Division (Les Deux Royaumes).
"A graphic novel turns the Rumble in the Jungle into a visual gut punch" - The New York Times

“The drawings and photos allow us to revel in the imagery and history of that unforgettable night, and the torrid pace of the storytelling, the many flashbacks allow us to see the full context of the fight” - The Ring

“One of the most interesting sports documentary graphic novels I’ve read, and one of my favorite reads of 2021” - Comic Book Herald

“One of the pleasures of reading Muhammad Ali, Kinshasa 1974 is how seamlessly Abbas’ photos mesh with Ortiz’ artwork.  Combined with Morvan’s prose it is as though you are ringside witnessing history while viewing the spectacle from Abbas’ perspective ... Using a new lens on a spectacle that has been chronicled many times over it delivers from start to finish and adds another layer to one of the most famous sporting events of all time” - Comix Asylum

“Equal parts sports journalism and comics history, it's the celebration of one of the all time greats viewed through the lenses of art as history, and history as art” - AlastairStewart.com