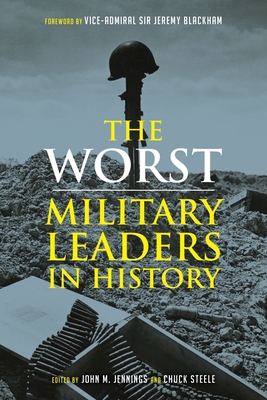 
On Our Shelves Now. Click on title for location specific availability.
Spanning countries and centuries, a “how-not-to” guide to leadership that reveals the most maladroit military commanders in history.

For this book, fifteen distinguished historians were given a deceptively simple task: identify their choice for the worst military leader in history and then explain why theirs is the worst.

From the clueless Conrad von Hötzendorf and George A. Custer to the criminal Baron Roman F. von Ungern-Sternberg and the bungling Garnet Wolseley, this book presents a rogues’ gallery of military incompetents. Rather than merely rehashing biographical details, the contributors take an original and unconventional look at military leadership in a way that appeals to both specialists and general readers alike.

While there are plenty of books that analyze the keys to success, The Worst Military Leaders in History offers lessons of failure to avoid. In other words, this book is a “how-not-to” guide to leadership.
John M. Jennings is professor of history at the United States Air Force Academy, where he specializes in modern Japanese history. He is the author of The Opium Empire: Japanese Imperialism and Drug Trafficking in Asia, 1895–1945 and lives in Colorado.

Chuck Steele is associate professor of history at the United States Air Force Academy and lives in Colorado.
"Ranging far and wide in chronology and geography . . . this is a stimulating collection of essays—pithily written and persuasively argued—that fills a gap in the important study of 'those who make someone else’s victory possible.'"
— Saul David

"On the night Russia invaded Ukraine, I was reading a new book, The Worst Military Leaders in History, edited by Jennings and Steele. The monumental failings of leadership described range from the well-known death of General Custer and all his men to the less remembered Athenian leader, Nikias, whose disastrous attempt to capture Syracuse led to the collapse of the entire Athenian empire. Three weeks on, it seems like a second edition might have to include the Russian defense minister, Sergei Shoygu, and his top brass."
— William Hague

"This book examines a rogues' gallery of military leaders from across history who may be judged to have failed as a result of their own errors rather than through the brilliance of an opposing commander. Some of them failed in terms of strategic vision and planning, some because of tactical ineptitude, and others as the result of serious flaws of character. . . . On it goes, a tally of tragedy inflicted on troops and civilians alike by leaders at best inept, and at worst immoral, in their behavior."
— History of War

"This international and centuries-long rogues gallery exemplifies the challenges of command and the factors, personal, political, strategic, and tactical, that a leader entertains or ignores at his peril. Most of the subjects are easily recognizable for their shortcomings, and a couple are surprising. JAMP readers will enjoy the lot."
— Journal of America's Military Past

"This gem of a book should be required reading at war colleges everywhere, for understanding the factors that can produce defeat is at least as—if not more—important for those future commanders as grasping the factors that can yield victory."
— Mark Clodfelter, professor emeritus, National War College, author of "Beneficial Bombing: The Progressive Foundations of American Air Power, 1917–1945"