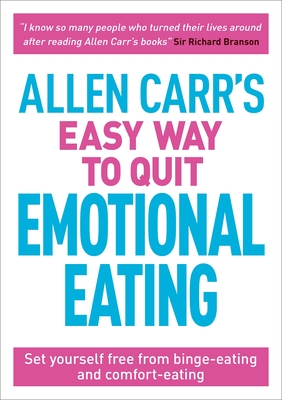 Allen Carr's Easyway is the most successful self-help stop-smoking method of all time. It has helped millions of smokers all over the world to quit, and has since been used to treat other addictions such as drinking and gambling. Allen Carr's Easyway method works by unravelling the brainwashing that leads us to desire the very thing that is harming us, meaning that we are freed from the addiction rather than merely restricting our behavior.

The Easyway method has now been applied to the problem of emotional eating. With Allen Carr's Easyway method, you can eat as much of your favorite foods as you want, whenever you want, as often as you want, and be the exact weight you want to be, without dieting, special exercise, using willpower or feeling deprived. Do you find that difficult to believe? Read this book. What people say about Allen Carr's Easyway method: The Allen Carr program was nothing short of a miracle.
Anjelica Huston His skill is in removing the psychological dependence.
The Sunday Times I know so many people who turned their lives around after reading Allen Carr's books.
Sir Richard Branson
Allen Carr was a chain-smoker for over 30 years. After repeated failed attempts to stop smoking, he went from 100 cigarettes a day to zero without suffering withdrawal pangs, without using willpower and without putting on weight. The phenomenon that is Allen Carr's Easyway method had been born, and it led to Allen's recognition as the world's leading expert on stopping smoking. John Dicey is Global CEO and Managing Director of Allen Carr's Easyway. John worked closely with Allen Carr and is now responsible for ensuring that all books, services and other products remain faithful to Allen Carr's original vision for the method.