Of Silenced and Unheard Voices from the South: Argentinean Subalternity According to Luisa Valenzuela (Hispanic Studies: Culture and Ideas #80) (Paperback) 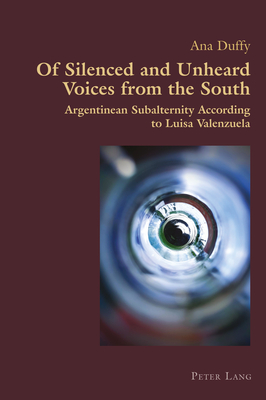 Of Silenced and Unheard Voices from the South: Argentinean Subalternity According to Luisa Valenzuela (Hispanic Studies: Culture and Ideas #80) (Paperback)

This is book number 80 in the Hispanic Studies: Culture and Ideas series.

Luisa Valenzuela's oeuvre is marked by a fixation with marginal characters, those often rendered invisible by society and outside hegemony: the subaltern. Valenzuela's El Ma ana captures echoes of the past, aggravated in a globalized world, takes them apart and reassembles them, to then project them into the future. With a clearly dystopian intention, Valenzuela's novel reveals how instances of subjugation under despotism may be re-enacted by following a pattern of forgetting and repeating.

This book examines the novel's main fictional characters, who propel the reader to an Argentinean distant and recent past, present and future, challenging and dismantling their founding beliefs, and finally reformulating them from below. The novel is shown to present a decolonial version of the dystopian genre in which a new configuration of power projects the perils of gender, class and patriarchal oppression onto the future, along the lines of coloniality. Ultimately, by addressing themes relevant to the fields of literary fiction, criticism and theory as well as decolonial and postcolonial studies, this book maps out the development of subalternity by performing a situated reading of a major work of Argentinean literature.

Ana Duffy holds a PhD in Latin American Literature from the University of Queensland, Australia. She has worked in various Australian universities as a lecturer and tutor in the fields of Latin American studies and literature, Spanish and, being a writer herself, in creative writing and literary studies. As a researcher, she has focused on Luisa Valenzuela, marginality and, more recently, on the practice of creative writing in a foreign country and through a borrowed language.