High Conflict: Why We Get Trapped and How We Get Out (CD-Audio) 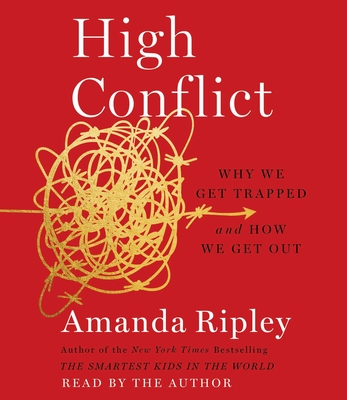 High Conflict: Why We Get Trapped and How We Get Out (CD-Audio)


Special Order - Subject to availability
When we are baffled by the insanity of the “other side”—in our politics, at work, or at home—it’s because we aren’t seeing how the conflict itself has taken over.

That’s what “high conflict” does. It’s the invisible hand of our time. And it’s different from the useful friction of healthy conflict. That’s good conflict, and it’s a necessary force that pushes us to be better people.

High conflict is what happens when discord distills into a good-versus-evil kind of feud, the kind with an us and a them. In this state, the brain behaves differently. We feel increasingly certain of our own superiority, and everything we do to try to end the conflict, usually makes it worse. Eventually, we can start to mimic the behavior of our adversaries, harming what we hold most dear.

Our journey begins in California, where a world-renowned conflict expert struggles to extract himself from a political feud. Then we meet a Chicago gang leader who dedicates his life to a vendetta—only to realize, years later, that the story he’d told himself about the conflict was not quite true. Next, we travel to Colombia, to find out whether thousands of people can be nudged out of high conflict at scale. Finally, we return to America to see what happens when a group of liberal Manhattan Jews and conservative Michigan corrections officers choose to stay in each other’s homes in order to understand one another better, even as they continue to disagree.

All these people, in dramatically different situations, were drawn into high conflict by similar forces, including conflict entrepreneurs, humiliation, and false binaries. But ultimately, all of them found ways to transform high conflict into good conflict, the kind that made them better people. They rehumanized and recatego­rized their opponents, and they revived curiosity and wonder, even as they continued to fight for what they knew was right.

People do escape high conflict. Individuals—even entire communities—can short-circuit the feedback loops of outrage and blame, if they want to. This is an “insightful and enthralling” (The New York Times Book Review) book—and a mind-opening new way to think about conflict that will transform how we move through the world.

Featuring audio highlights from actual interviews, town hall meetings, and podcasts.
Amanda Ripley is the New York Times bestselling author of The Smartest Kids in the World, High Conflict, and The Unthinkable. She writes for The Atlantic, Politico, The Washington Post, The New York Times, and The Wall Street Journal, among other publications.

Amanda Ripley is the New York Times bestselling author of The Smartest Kids in the World, High Conflict, and The Unthinkable. She writes for The Atlantic, Politico, The Washington Post, The New York Times, and The Wall Street Journal, among other publications.