The Shepherd Metaphor in the Old Testament, and Its Use in Pastoral and Leadership Models (Religions and Discourse #27) (Paperback) 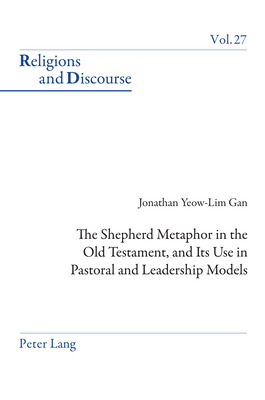 The Shepherd Metaphor in the Old Testament, and Its Use in Pastoral and Leadership Models (Religions and Discourse #27) (Paperback)

This is book number 27 in the Religions and Discourse series.

Jonathan Yeow-Lim Gan was born and raised in Singapore and has been a pastor in Singapore before moving to Canada to pastor a multilingual church (English, Mandarin, Cantonese). He has designed Bible study curriculum and taught Bible courses for churches in English and Mandarin. His research area is in metaphor and rhetorical criticism, particularly the shepherd metaphor, which has resulted in publication. He graduated from Singapore Bible College with his BTh, and subsequently obtained his MTh and PhD in Theology, specializing in Old Testament, from the University of South Africa. He is a member of the Society of Biblical Literature and an ordained minister of the Canadian Baptists of Ontario and Quebec. He is married to Lucinda and currently resides in Singapore.