One-Way Street: And Other Writings (Paperback) 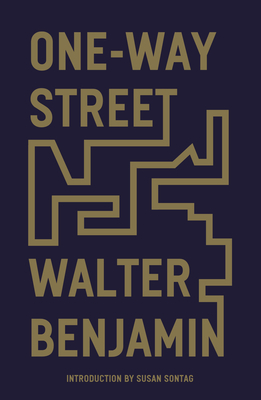 One-Way Street: And Other Writings (Paperback)


On Our Shelves Now. Click on title for location specific availability.
A classic collection of Walter Benjamin's essays, including some of his most celebrated writing

Walter Benjamin is one of the most fascinating and enigmatic intellectual figures of this century. Not only was he a thinker who made an enormous impact with his critical and philosophical writings, he shattered disciplinary and stylistic conventions.

This collection, introduced by Susan Sontag, contains the most representative and illuminating selection of his work over a twenty-year period, and thus does full justice to the richness and the multi-dimensional nature of his thought. Included in these pages are aphorisms and townscapes, esoteric meditation and reminiscences of childhood, and reflections on language, psychology, aesthetics and politics.
Walter Benjamin was a German-Jewish Marxist literary critic, essayist, translator, and philosopher. He was at times associated with the Frankfurt School of critical theory and is the author of Illuminations, The Arcades Project, and The Origin of German Tragic Drama.