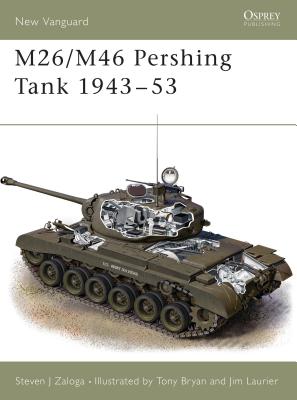 This is book number 35 in the New Vanguard series.

From the moment that the M4 Sherman had been matched against German Panther and Tiger tanks, the American tank crews had known that their vehicles were outclassed by the opposition. What was needed was a more powerful tank, more heavily armed and armored, that could take-on the powerful German panzers on a more equal footing. Although it took time to develop by the latter months of the war numbers of M26 Pershing tanks were reaching the frontline US armored units. Well armored and with a powerful 90mm gun the Pershing was a match for any tank in the German order of battle.
Steven J. Zaloga received his BA in History from Union College and his MA from Columbia University. He has worked as an analyst in the aerospace industry for four decades, covering missile systems and the international arms trade, and has served with the Institute for Defense Analyses, a federal think tank. He is the author of numerous books on military technology and history, including NVG 294 Allied Tanks in Normandy 1944 and NVG 283 American Guided Missiles of World War II. He currently lives in Maryland, USA.