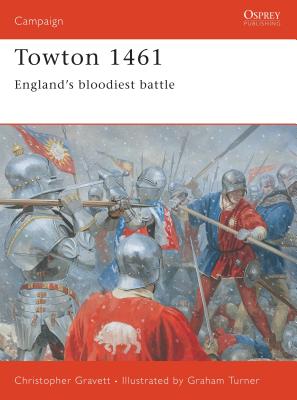 This is book number 471 in the Campaign series.

On a bitterly cold Palm Sunday, 29 March 1461, the army of King Edward IV met that of his Lancastrian enemies on a snow-covered battlefield south of the village of Towton in Yorkshire. The struggle lasted all day in the longest and bloodiest battle of the Wars of the Roses (1455-1485). With the arrival of Yorkist reinforcements under the Duke of Norfolk, the Lancastrian line eventually broke and their troops fled, many being caught and slaughtered in the death trap known as 'Bloody Meadow'. Christopher Gravett examines the campaign that marked the resurgence of the Yorkist cause and established Edward IV as king
Graham Turner is a leading historical artist, specializing in the medieval period. He has illustrated numerous titles for Osprey, covering a wide variety of subjects from the dress of the 10th-century armies of the Caliphates, through the action of bloody medieval battles, to the daily life of the British Redcoat of the late 18th century. The son of the illustrator Michael Turner, Graham lives and works in Buckinghamshire, UK.