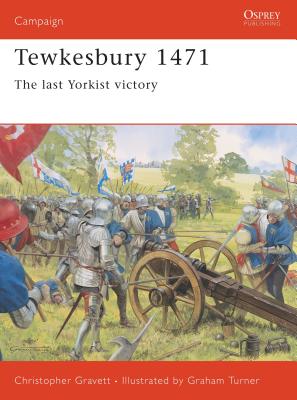 This is book number 131 in the Campaign series.

In this book Christopher Gravett details the climactic events of 1471 and the battle that virtually extinguished the Lancastrian cause. After the crushing Yorkist victory at Towton in 1461, King Edward IV appeared to have triumphed in England's bloody Wars of the Roses (1455-1485). The Lancastrian King Henry VI was even a prisoner in the Tower of London. By 1470, however, Edward's erstwhile ally the Earl of Warwick – The 'Kingmaker' – had joined the Lancastrians and a final reckoning was inevitable. Warwick perished at Barnet in April 1471, and on 4 May Edward confronted his enemies, including Edward, Prince and last hope of the House of Lancaster, at Tewkesbury.
Graham Turner is a leading historical artist, specializing in the medieval period. He has illustrated numerous titles for Osprey, covering a wide variety of subjects from the dress of the 10th-century armies of the Caliphates, through the action of bloody medieval battles, to the daily life of the British Redcoat of the late 18th century. The son of the illustrator Michael Turner, Graham lives and works in Buckinghamshire, UK.