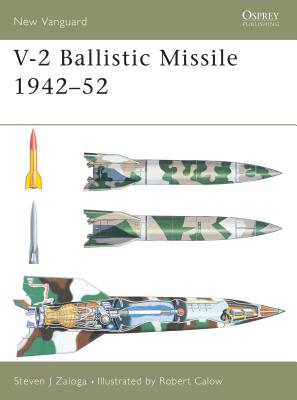 This is book number 82 in the New Vanguard series.

The German A-4 ballistic missile, better known by its propaganda name of V-2, was the world's first successful ballistic missile, breaking through the atmosphere to reach its target quicker. It was a forerunner of Cold War ballistic missiles and its combat use in 1944-45 set the pattern for the use of Scud ballistic missiles in recent decades. The V-2 offensive lasted from September 1944 until March 1945 with over 3,000 rockets being launched. This book examines the combat record of the V-2 in World War II, with a special focus on how a German missile battalion actually prepared and fired its missiles.
Steven J. Zaloga received his BA in History from Union College and his MA from Columbia University. He has worked as an analyst in the aerospace industry for four decades, covering missile systems and the international arms trade, and has served with the Institute for Defense Analyses, a federal think tank. He is the author of numerous books on military technology and history, including NVG 294 Allied Tanks in Normandy 1944 and NVG 283 American Guided Missiles of World War II. He currently lives in Maryland, USA.
“The design and operational history presented by Mr. Zaloga is great reading and well presented. The numerous pictures and drawings compliment the text well. Anyone interested in WWII history will enjoy reading this book. Recommended.” —Bryan Dewberry, Armorama (December 2003)