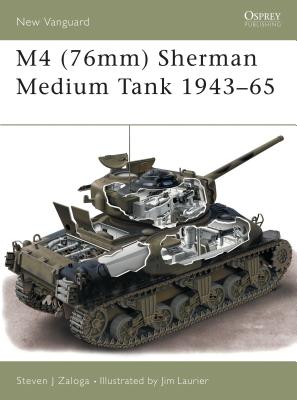 This is book number 73 in the New Vanguard series.

The M4 Sherman tank was the mainstay of the Western allies between 1942 and 1945. Fast and modern it was a big success and was transported as far afield as Russia and North Africa. The American Chief of Staff claimed in November 1943 it was 'hailed widely as the best tank on the battlefield today…'. However, by the Normandy invasion of June 1944 this was not the case: the new German heavy tanks such as the Panther and Tiger were completely outclassing the Sherman. This title covers the M4 version armed with the 76 mm gun, examining developments such as the HVSS suspension, using much new archive material.
Steven J. Zaloga received his BA in History from Union College and his MA from Columbia University. He has worked as an analyst in the aerospace industry for four decades, covering missile systems and the international arms trade, and has served with the Institute for Defense Analyses, a federal think tank. He is the author of numerous books on military technology and history, including NVG 294 Allied Tanks in Normandy 1944 and NVG 283 American Guided Missiles of World War II. He currently lives in Maryland, USA.