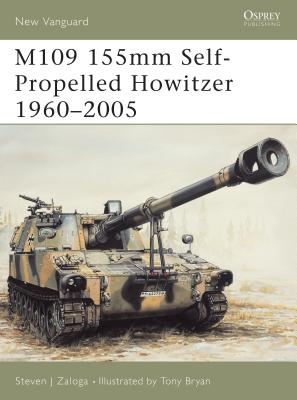 This is book number 86 in the New Vanguard series.

Entering service in the early 1960s, the M109 Self-Propelled Howitzer has been in production for 34 years and forms the backbone of US Army and Reserve artillery units. The M109A6 is the latest development of the M109 series and incorporates advanced fire control systems that enable it to have its first rounds on target less than 60 seconds after arriving at firing location. This ability to shift quickly between moving and firing modes avoids counter battery fire and ensures battlefield survivability. This book details an impressive and versatile weapon that has served around the globe in Southeast Asia and in Operations Desert Shield and Desert Storm.
Steven J. Zaloga received his BA in History from Union College and his MA from Columbia University. He has worked as an analyst in the aerospace industry for four decades, covering missile systems and the international arms trade, and has served with the Institute for Defense Analyses, a federal think tank. He is the author of numerous books on military technology and history, including NVG 294 Allied Tanks in Normandy 1944 and NVG 283 American Guided Missiles of World War II. He currently lives in Maryland, USA.