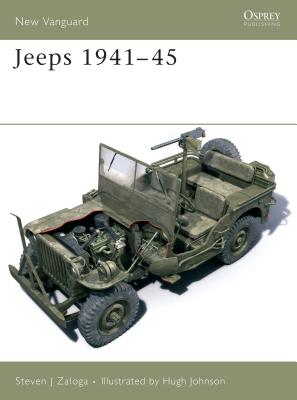 This is book number 117 in the New Vanguard series.

The jeep was the most famous military vehicle of World War II, and its name has become synonymous with a whole class of military and civilian all-terrain vehicles. The jeep originated in a prewar US Army requirement for a simple, inexpensive, and robust vehicle for basic utility chores. Its simple design proved to be adaptable to a host of military tasks including use as a scout vehicle, battlefield ambulance, communications vehicle, and staff car. This book, covering “the savior of World War II”, focuses on the design and development of this versatile vehicle used on nearly every front of World War II.
Steven J. Zaloga received his BA in History from Union College and his MA from Columbia University. He has worked as an analyst in the aerospace industry for four decades, covering missile systems and the international arms trade, and has served with the Institute for Defense Analyses, a federal think tank. He is the author of numerous books on military technology and history, including NVG 294 Allied Tanks in Normandy 1944 and NVG 283 American Guided Missiles of World War II. He currently lives in Maryland, USA.

“Once again Steve Zaloga comes through with a short, concise history of the ubiquitous Jeep!” —Dave O'Meara, Armorama (February 2006)

“I have to say that I like the way this book reads. If you are looking for a handy, quick reference that covers the basics of many of the Jeep variants, then by all means, buy this book.” —Mark Smith, Armorama (December 2005)