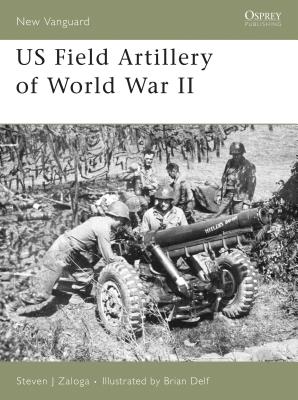 This is book number 131 in the New Vanguard series.

Determined to learn from the lessons of World War I where it was unprepared and heavily reliant on British and French guns, the US Army developed a whole new generation of field artillery weapons and tactics during the 1930s. Consequently, in World War II it was the clear leader in field artillery.

Providing a thorough examination of the many critical innovations and doctrines, and the impact they had on performance in combat, this book demonstrates why US field artillery was so effective in World War II. Innovations featured include the motorization of artillery, which increased mobility; fire direction centers, which enhanced their firepower; aerial observation; and radio communications.

Exploring, in their entirety, the weapons that formed the backbone of the US artillery arsenal in World War II, this book reveals a wealth of detail not readily available elsewhere.

“Steven J. Zaloga is well known for his expertise in things military and he shares that with us in this volume, in a highly readable and interesting presentation... This is all superbly illustrated by Brian Delf with some excellent color illustrations in the center of the book of nearly all the weapons covered in the body of the work. This is further enhanced by a fine selection of period images. It all comes together in a book of excellent quality and one that you can buy with confidence.” —Scott Van Aken, modelingmadness.com

“As always the case with this author, the text is well-written, easily understood and very informative... the selection of images is simply outstanding... if you are even the least bit interested in this subject, this book is a must for your reference library... Highly recommended.” —Frank De Sisto, missing-lynx.com