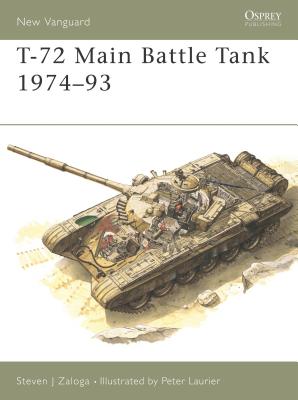 This is book number 6 in the New Vanguard series.

The Russian T-72 Ural tank is the most widely-deployed main battle tank of the current generation. Used by the armies of the former Warsaw pact and Soviet Union, it has also been exported in large numbers to many of the states in the Middle East. This book reveals the previously secret history behind the tank. Steven J Zaloga examines the conditions under which the T-72 was designed and produced. Technical aspects of the weapon are also discussed, including its EDZ reactive armour which, when it first appeared in December 1984, gave NATO a nasty shock.
Steven J. Zaloga received his BA in History from Union College and his MA from Columbia University. He has worked as an analyst in the aerospace industry for four decades, covering missile systems and the international arms trade, and has served with the Institute for Defense Analyses, a federal think tank. He is the author of numerous books on military technology and history, including NVG 294 Allied Tanks in Normandy 1944 and NVG 283 American Guided Missiles of World War II. He currently lives in Maryland, USA.