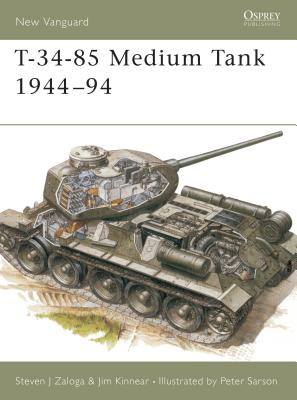 This is book number 20 in the New Vanguard series.

The T-34-85 tank is one of those rare weapons that have remained in service for more than half a century. First introduced in 1944, it has seen combat in nearly every corner of the globe. Steven Zaloga and Jim Kinnear look at this long-serving tank at length. Although long obsolete in Europe, it has proven a reliable and potent weapon in many Third World conflicts, and is still in service with more than a dozen armies around the world.
Steven J. Zaloga received his BA in History from Union College and his MA from Columbia University. He has worked as an analyst in the aerospace industry for four decades, covering missile systems and the international arms trade, and has served with the Institute for Defense Analyses, a federal think tank. He is the author of numerous books on military technology and history, including NVG 294 Allied Tanks in Normandy 1944 and NVG 283 American Guided Missiles of World War II. He currently lives in Maryland, USA.