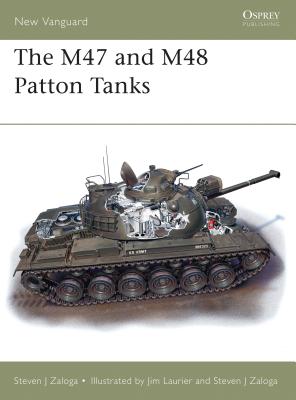 This is book number 31 in the New Vanguard series.

With Cold War fears mounting, the M47 and M48 were rushed into production – teething troubles were inevitable. In the decade that followed, however, these tanks proved to be the backbone of US armoured units. In its lifetime, the Patton has played vital roles in three wars, including Vietnam, and has served with more than 25 nations; it has spawned derivatives such as the Armored Vehicle Launched Bridge, an anti-aircraft variant, and has undergone diverse armament modifications. This book provides a comprehensive view of the M47 and M48 Patton tanks, combining technical information with fascinating accounts of the performance, development and deployment of this battle-tested and truly international fighting machine.
Steven J. Zaloga received his BA in History from Union College and his MA from Columbia University. He has worked as an analyst in the aerospace industry for four decades, covering missile systems and the international arms trade, and has served with the Institute for Defense Analyses, a federal think tank. He is the author of numerous books on military technology and history, including NVG 294 Allied Tanks in Normandy 1944 and NVG 283 American Guided Missiles of World War II. He currently lives in Maryland, USA.