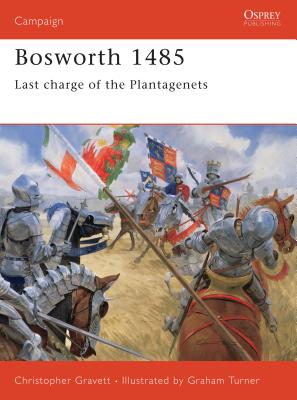 This is book number 66 in the Campaign series.

The battle of Bosworth effectively put an end to the dynastic struggle known as the Wars of the Roses (1455-1485). Guiding the reader from the campaign's origins to its aftermath, and covering the commanders and forces of King Richard III and Henry Tudor, this is a complete treatment of one of the most important events in English history. Shakespeare was to immortalize the battle and Richard's death in Richard III, and the life and reign of the last Plantagenet have sparked centuries of debate. Christopher Gravett cuts through myth and propaganda as he clearly details the course of this pivotal campaign.
Graham Turner is a leading historical artist, specializing in the medieval period. He has illustrated numerous titles for Osprey, covering a wide variety of subjects from the dress of the 10th-century armies of the Caliphates, through the action of bloody medieval battles, to the daily life of the British Redcoat of the late 18th century. The son of the illustrator Michael Turner, Graham lives and works in Buckinghamshire, UK.