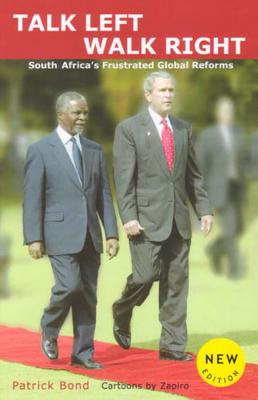 Thabo Mbeki - President of South Africa - has advocated unity with global justice movement activists. "They may act in ways you and I may not like and break windows in the street, but the message they communicate relates." This raises critical questions. Is the South African government genuinely opposed to what Mbeki calls 'global apartheid?' Are the reforms advocated by Pretoria succeeding, even on their own limited terms? This new edition of Talk Left, Walk Right answers both questions in the negative. With incomparable political cartoons, the book considers the dynamics of international political economy and geopolitics. The book reviews a series of contemporary examples where Pretoria is frustrated by unfavorable power relations including: US unilateralism and militarism, the UN's World Conference Against Racism and reparations for apartheid profits, soured trade deals, stingy debt relief and counterproductive international financial flows, unsuccessful reform of multilateral institutions, the New Partnership for Africa's Development, the Johannesburg World Summit on Sustainable Development, the World Water Forum, UN Security Council reform, haggling with the G8, and African peace-building. The Afterword to this updated edition provides critical analysis from the 2004-06 period, characterized by backsliding in nearly all areas of global governance. The book poses alternatives and also assesses the progressive social movements, which may well be Mbeki's most persistent, unforgiving judges, both locally and globally.