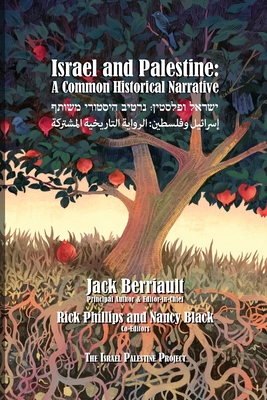 From Two Stories to One . . . Many historians have chronicled the tragic and persistent struggle between the peoples of Palestine and Israel, revealing the separate national stories generated and held close by both sides. But this book tells the story of Israel and Palestine from a unique perspective. Over two decades ago, Jack Berriault, founder of The Israel Palestine Project, asked the question, "What would be possible if Palestinians and Israelis embraced a single, common narrative in which both peoples were equally represented, understood and honored?" The journey of exploration and discovery that followed produced the book you now hold in your hands.

Jack Berriault (1930-2016), Principal author and editor of Israel and Palestine: A Common Historical Narrative, was a visionary in the field of transformational theory and practice, and a life-long champion of a world at peace that works for all, with no one left behind.

More information on Jack, and on his collaborators, Rick Phillips and Nancy Black, is available at https: //www.israelpalestineproject.org.

"Essential reading for Palestinians and Israelis alike, and for anyone encountering this conflict for the first time.... A well-crafted story, carefully balanced and simply told " - Moshe Ma'oz, Professor Emeritus in Middle East History and Islam, Hebrew University.

"By taking no side in the struggle between Israelis and Palestinians, . . . this book] takes both sides, which is the side of Humanity " - Richard Forer, author of Wake Up and Reclaim Your Humanity - Essays on the Tragedy of Israel-Palestine.