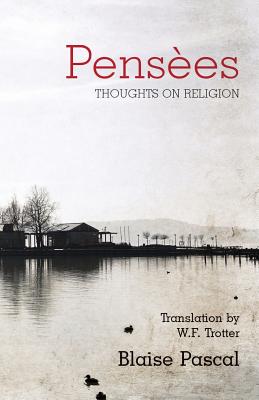 
Not on our shelves. Usually ships in 2-5 days.
(This book is nonreturnable. Nonreturnable books may take up to 3 weeks to ship. All sales final.)
A CHRISTIAN CLASSIC

"For after all what is man in nature? A nothing in relation to infinity, all in relation to nothing, a central point between nothing and all and infinitely far from understanding either. The ends of things and their beginnings are impregnably concealed from him in an impenetrable secret. He is equally incapable of seeing the nothingness out of which he was drawn and the infinite in which he is engulfed." -Blaise Pascal, Pens es No. 72

Pascal's most influential theological work, referred to posthumously as the Pens es ("Thoughts"), was not completed before his death. It was to have been a sustained and coherent examination and defense of the Christian faith. The first version of the numerous scraps of paper found after his death appeared in print as a book in 1669 and soon thereafter became a classic. Pascal's Pens es is widely considered to be a masterpiece.