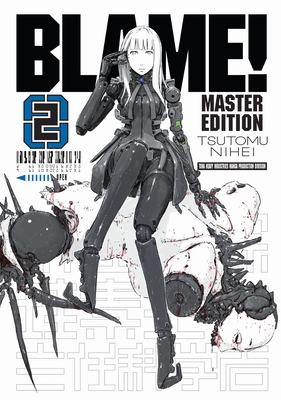 The Administration contacts Kyrii and Cibo, encouraging them to keep searching for the Net Terminal Gene which will stop the City from its intractable, chaotic growth. The Admin also warns them of the autonomous Safeguards, vicious entities that attempt to kill off any humans who access the Netsphere without the required Net Terminal Gene. Kyrii is attacked, and a group of humans who have settled on the outskirts of Toha Heavy Industries comes to his aid. Kyrii awakens with a newfound ability to read his surroundings, which allows him mere seconds to fend off an attacker lurking among the humans settlement. In the ensuing battle, Cibo makes a heavy sacrifice, but not before learning a startling truth about her traveling companion...
Tsutomu Nihei is an internationally known Japanese comic artist and draftsman. Born in 1971, Nihei made his debut in the comics world as the winner of the 1995 Afternoon Magazine Four Seasons Award for short stories. He then briefly worked as an assistant to veteran comicker Tsutomu Takahashi before making his break-through hit BLAME! (published by Tokyopop).

The BLAME! franchise was so well received worldwide, that it inspired an animated mini-series and eventually drew the attention of Marvel Comics in the US. Nihei would later go on to draw Wolverine (X-Men) and HALO comics for Marvel to great fanfare. An architectural student, Nihei's early work were mainly wordless, relying on visuals and backgrounds to tell their stories. Now, his works are deeply rooted in hard science-fiction, as was seen in the multiple NY Times Bestselling books HALO: The Graphic Novel (published by Marvel Comics) and BIOmega (published by Viz Media).
"Whether it be the great pacing and layouts to the frenetic action that occupies the panels in these scenes, every one of them always packs a punch. These are all emphasized by some great designs across the board." - The Turnaround Blog