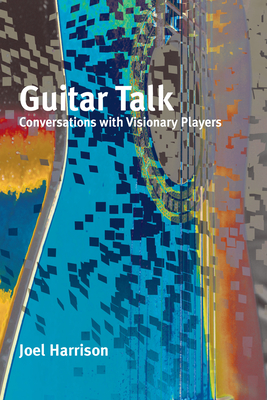 
On Our Shelves Now. Click on title for location specific availability.
Secrets of master guitarists, revealed in conversation.

An enormous range of approaches and sounds exist in the modern guitar. The instrument can howl, scrape, scratch, scream, sing, pluck, and soothe. What stands out in this book is not so much the instrument itself, rather the wonderful and idiosyncratic personalities of these bold souls, their sometimes wild, often zigzagging, and ultimately profound journeys toward beauty, meaning, and excellence in their work.

We find out that jazz icon Bill Frisell won a high school band contest playing R&B tunes, beating out future members of Earth Wind and Fire. We learn which of Nels Cline's compositions he wishes to have played at his funeral. Michael Gregory Jackson recounts painful episodes of racism as he stretched between the chasm of avant jazz, rock, and blues in the 1980s. Many more revelations, amusements, and philosophies abound.

Joel Harrison has been awarded grants by the Guggenheim Foundation, Chamber Music America, Meet the Composer, New Music USA, Jerome Foundation, NYSCA, Doris Duke, and Flagler Cary Trust. He has appeared on the "Rising Star" Downbeat Magazine poll for many years. His twenty albums as a leader showcase his prowess as a shapeshifting composer, including works for orchestra, big band, string quartet, solo cello, and percussion, small group jazz, and voice. Harrison is the founder and director of the Alternative Guitar Summit, a yearly festival devoted to new and unusual guitar music.