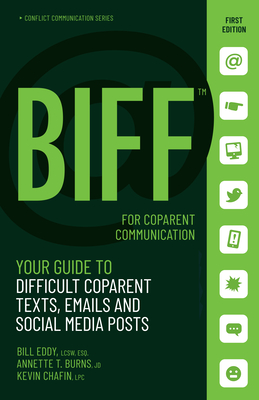 Coparenting is hard in any circumstance and when doing it with someone that has a high conflict personality, can seem impossible. The first step is to admit that you are outmatched in every way except for the ability to learn new skills related to the high conflict personality. My life did not change until I began to read and understand and start using tools like BIFF. I couldn't help my children because I couldn't help myself and until I learned new tools, felt hopeless. Using BIFF will give you hope that change is possible." A.C., parent

Use BIFF to Communicate with Your Ex's Blaming, Accusing and Taunting Texts and Emails

In divorce and co-parenting, not only do you need to deal with your own emotions, you may be faced with a daily barrage of hostile calls, texts, email, and social media blasts. How can you regain a sense of control and peace for your own sake and for the kids?

For more than a decade, the BIFF method of responding to hostile and misinforming emails, texts, and conversations has grown in use by thousands of people dealing with a difficult co-parent and with those who may have a high conflict personality, and it helps with those who don't. This third book in the BIFF(TM) Conflict Communication Series is especially devoted to parents dealing with issues during, and after, separation and divorce. Complete with instructions in the four-step BIFF method, and numerous practical examples, readers will learn the intricacies of their new parenting environment.

When parents use this approach, not only do they feel good about their end of the written or verbal conversation, but it tends to influence the other parent to communicate more productively as well. While it's simple and practical, it's not natural for most of us because we are hooked by the emotional intensity. This book can help you reduce the conflict and regain your sanity by learning what to write and what not to write.

Kevin Chafin is a mediator and Licensed Professional Counselor in private practice in Kansas City, Missouri. He is the current president of the board of the Missouri Chapter of the Association of Family and Conciliation Courts (MO-AFCC.) He has more than 30 years' experience with family and domestic court systems. Coparenting counseling is a large part of his practice, often with high conflict families. He is a regular presenter on topics related to mediation as well as court involved counseling with parents and children. Kevin lives and practices in the vibrant Westport area of Kansas City, Missouri.