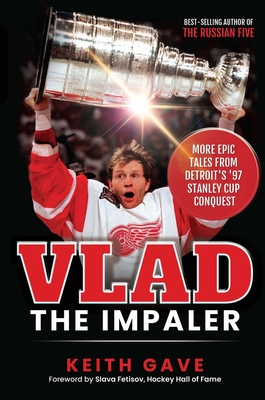 In-store event October 1 in Okemos at 11am!

This event is free to attend. However it helps us in planning to receive your RSVP. Please register here so we know you plan to join us: https://keithgavegrandrapids.eventbrite.com

This event is free to attend. However it helps us in planning to receive your RSVP. Please register here so we know you plan to join us: https://keithgavegrandrapids.eventbrite.com

Picking up where the international best-selling book The Russian Five left off, Vlad the Impaler will have readers alternately laughing—and in tears—with dozens more memorable, untold stories and anecdotes from the Detroit Red Wings Stanley Cup championship season in 1997, 25 years ago. The book includes a foreword by Hall of Fame defenseman Slava Fetisov, along with lengthy excerpts from interviews of several members of that team, from captain Steve Yzerman, teammates Brendan Shanahan, Nicklas Lidstrom, Sergei Fedorov, Igor Larionov, Slava Kozlov, and coach Scotty Bowman, among many others. A portion of the proceeds from the book will be earmarked for the Vladimir Konstantinov Special Needs Trust to help ensure the care he needs after suffering catastrophic injuries just a week after he helped the Wings win their first Stanley Cup title in 42 years. #Believe
The award-winning author of the best-selling book, The Russian Five, A Story of Espionage, Defection, Bribery and Courage, Keith Gave spent six years in the United States Army as a Russian linguist in West Berlin, working for the National Security Agency during the Cold War. A native of suburban Detroit, Gave’s news career has spanned more than 40 years, including stints with The Associated Press (Chicago Bureau) and the Dallas Morning News, where his editors nominated him for a Pulitzer Prize. More recently, he spent nearly 20 years as a college English and journalism instructor.
"Keith Gave, always a terrific reporter, had a front row seat to the most fascinating and colorful chapter of Red Wings history – the Russian Five. At times, he was smack in the middle of it, as an envoy, Russian-speaker and secret-keeper. No one could write this story with the detail, depth and understanding that Gave delivers." —Mitch Albom, columnist, Detroit Free Press

"Few knew of the role played by one multi-lingual erstwhile Detroit Free Press reporter who stickhandled through the Soviet KGB to plant the seed that sprung two of the most important spokes in the winged wheel. . . The ultimate ‘inside story’ of those days." —Mike ‘Doc’ Emrick, five-time Emmy Award-winning, Hall of Fame broadcaster and the voice of hockey on NBC-TV