The Face of the Waters (Paperback) 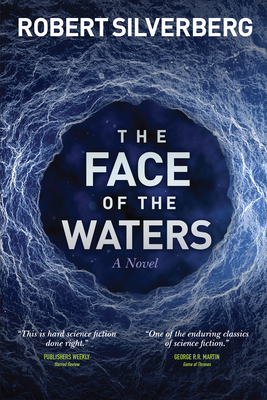 The Face of the Waters (Paperback)

Deep in the future, natives of the planet Hydros, an ocean planet whose inhabitants live on artificial floating islands, force the entire human population of the island of Sorve into exile, leaving the outcasts to ponder their fate, their past, and the true purpose of humanity.

After a human offense against the natives of Hydros, the human population of the island of Sorve are ordered to leave. Forbidden on all other islands, in a flotilla of ships they seek the semi-mythical island of the Face of the Waters. During their journey they are forced to learn more about themselves, leading to questions about both religion and the purpose of Man. At the end of the novel Robert Silverberg addresses what it means to be human, and explores what unites and divides humanity.

This new edition of THE FACE OF THE WATERS, published with the author's full support, brings Silverberg's brilliant novel back into the must-read science-fiction canon, after decades of being out of print.

ROBERT SILVERBERG is a giant in the science-fiction genre, with four Hugo Awards and six Nebula Awards to his name. He was inducted into the Science Fiction and Fantasy Hall of Fame in 1999 and named a Grand Master by the Science Fiction and Fantasy Writers of America Guild in 2005. His short story "Needle in a Timestack" was adapted for the screen by Oscar-winning writer John Ridley (12 Years a Slave) in 2021, and additional projects are slated to finally bring more Silverberg writing to the screen. He lives in Oakland, California.