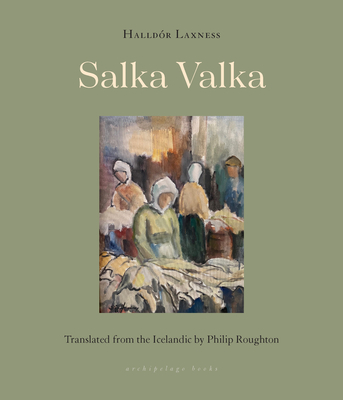 
On Our Shelves Now. Click on title for location specific availability.
"This is a remarkable achievement and will hopefully lead to a revival of interest in an oft-overlooked literary genius." – Publishers Weekly, starred review

A feminist coming of age tale, an elegy to the plight of the working class and the corrosive effects of social and economic inequality, and a poetic window into the arrival of modernity in a tiny industrial town, Salka Valka is a novel of epic proportions, living and breathing with its expansive cast of characters, filled with tenderness, humor, and remarkable pathos.

On a mid-winter night, an eleven-year-old Salvör and her unmarried mother Sigurlína disembark at the remote, run-down fishing village of Óseyri, where life is "lived in fish and consists of fish." The two women struggle to make their way amidst the domineering, salt-worn men of the town and their unsolicited attention, and, after Sigurlína's untimely death, Salvör pays for her funeral and walks home alone, precipitating her coming of age as a daring, strong-willed young woman who chops off her hair, earns her own wages, educates herself through political and philosophical texts, and, most significantly, becomes an advocate for the town's working class, ultimately organizing a local chapter of the seamen's union.
Halldór Laxness (1902-1998) is the undisputed master of modern Icelandic fiction. He was awarded the Nobel Prize in Literature in 1955 "for his vivid epic power which has renewed the great narrative art of Iceland." His body of work includes novels, essays, poems, plays, stories, and memoirs: more than sixty books in all. His works available in English include Independent People, The Fish Can Sing, World Light, Under the Glacier, Iceland's Bell, and Paradise Reclaimed.
Philip Roughton is an award-winning translator of Icelandic literature. His translations include works by many of Iceland’s best-known writers, including Laxness, Jón Kalman Stefánsson, Bergsveinn Birgisson, Steinunn Sigurðardóttir, and others. He was  awarded the 2015 American-Scandinavian Foundation Translation Competition Prize, for his translation of Laxness’ novel Gerpla (Wayward Heroes), the Oxford-Weidenfeld Prize for 2016, for his translation of Jón Kalman Stefánsson’s The Heart of Man, and an NEA Literature Translation Fellowship for 2017.
"Salka Valka is a wonderful exposure to Iceland’s troubled past and to the Icelandic sensibility that comes from making the best of things even when there isn’t much to be made. Laxness’s characters are rough and honest, and Salka Valka is one of the most empathetic portraits of a girl and a woman that I’ve read by a male author."
--Jane Smiley, Washington Post

"This is a better novel (richer, deeper) than anything else you’re likely to meet this year. Its people are as real as you or me—as are its shorebirds and its blizzards and its dreams and its cows."
--Brad Leithauser, Wall Street Journal

"A gripping wonder, and Laxness’s most sustained piece of narrative drama . . . Even in moments of high drama, [Philip Roughton] moves along with calm assurance, tossing off Laxness’s inventive and always spot-on descriptions as though they were commonplace, as when, on a cliff, the puffins “squatted with the dignity of church officials in front of their burrows.” He captures Laxness’s singular dour-droll tone with uncanny grace . . . Despite [Laxness's] mischievous show of ease, he is giving his book everything he has in the hope that it will exceed him."
– Salvatore Scibona, New Yorker

"A brooding novel of boreal discontentments by the Nobel Prize–winning Icelandic writer. Sigurlína Jónsdóttir has always been down on her luck. She decides to leave the frozen north coast of Iceland with her 11-year-old daughter, Salvör Valgerður, or Salka, whose father is unknown to her—and to Sigurlína, a sometime prostitute, as well. They get just a few miles south to a ramshackle fishing village, where they discover the manifold class divisions of early-20th-century Iceland. . .  There’s a poetry to Laxness’s depiction of a frayed mother-daughter relationship . . . [Salka Valka is] full of his trademark intersections of politics and religion."
-– Kirkus Reviews

"This is a remarkable achievement and will hopefully lead to a revival of interest in an oft-overlooked literary genius."
-– Publishers Weekly, starred review

"By turns caustic and lyrical, funny and forlorn . . . [an] undeniable success both as a literary achievement and an expression of [Laxness's] most deeply held beliefs . . . [Salka Valka and Independent People] represent the fullest expression of how Laxness saw society and the people for whom he wanted to transform it—those surviving beneath the mire of capital, alone in the world, together."
--Charlie Lee, The Baffler

"Laxness somehow blends epic form with the day-to-day realism of loan negotiations and herring and haircuts. He is a humorist and a visionary, a critical eye and an open heart. Salka Valka is a marvel, a pleasure, and a masterpiece."
--Rivka Galchen, author of Everyone Knows Your Mother Is a Witch

"First published in 1931-32, this freshly translated masterpiece is an Icelandic Grapes of Wrath, focusing on the plight of struggling fishing families in a tiny village, particularly on the hardships facing women like Salka, who, alone without a family, works and educates herself, becoming an effective seamen's union organizer . . . Absorbing, inspiring, surprisingly humorous–a great read."
--Lisa Howorth, Square Books

"I dedicate this valedictory as I turn the page on my bookselling career to Halldór Laxness . . . Laxness won the Nobel Prize for writing books like Salka Valka, in which he brings us cheek by caring jowl with a bull-headed orphan girl in an isolated, impoverished Icelandic fishing village, about as far from Brooklyn as one can imagine. Laxness is the ideal."
--Ezra Goldstein, Community Bookstore

"Laxness' small-town tale depicts a world where life is difficult, but the novel never sinks into deep gloom; there's a variety of resilient spirit here – with Salka Valka's particularly pronounced and strong . . . a very fine novel, and a wonderful character-portrait of a remarkable figure."
--Michael Orthofer, Complete Review

"Laxness is a true poet with language . . . [He] achieves a certain richness with his sublime and painterly landscapes and earnest portraits of 'insignificant' people living through a significant historical moment."
--Hannah Weber, Words Without Borders

"Doubtless, modern-day feminists will see in Salka an admirable example of female fortitude and resolve. And certainly, she is that. But she’s also much more. She is the ultimate realist, and she applies her clear-eyed vision with equal intensity to the price of fish as to the price love will exact on her heart."
--Patricia Schultheis, Washington Independent Review of Books

"The Icelandic novel from the interwar period has lost none of its relevance, and Philip Roughton’s sensitive but vigorous translation for Archipelago Books is a lucky chance. Laxness’ portrayal of Salka’s coming of age is empathetic and tactful; his depiction of Óseyri’s development from a remote fishermen’s village to a place that cannot escape globalisation and the new ideologies it brings is forceful and poignant . . . Laxness watches Salka closely as she leads her solitary life and makes us experience every emotion, every glimpse of happiness, and all her sorrow as if it were our own."
--Sarah Fengler, Oxonian Review