Trap Kitchen: Mac N' All Over The World: Bangin' Mac N' Cheese Recipes from Around the World (Hardcover) 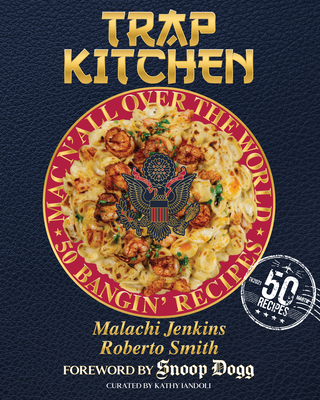 Trap Kitchen: Mac N' All Over The World: Bangin' Mac N' Cheese Recipes from Around the World (Hardcover)

This is book number 2 in the Trap Kitchen series.

A collection of 50 delicious worldwide mac n' cheese recipes from two chefs who have graduated from paper to cloth napkins. With Mac N' All Over The World, the Trap Kitchen franchise goes global.

"variations of cheese-drenched pasta scour the earth for inspiration.. No ounce of cheese ... is wasted in these deliciously outrageous recipes."  - Publishers Weekly

"The cookbook spills the secrets on their most notorious dish and ... flavors of regions from around the world."  - Ebony

Three years after the release of their first cookbook Trap Kitchen: Bangin' Recipes From Compton and a whirlwind of success later, former rival gang members turned famous chefs Malachi "Spank" Jenkins and Roberto "News" Smith are back with a second serving. Trap Kitchen: Mac'N All Over The World will combine the soul of macaroni and cheese from the heart of Compton with the flavors of regions around the world. From a business that started selling plates through their living room window via Instagram ads to now having multiple food trucks and even a brick and mortar store, Mac'N All Over The World continues where the first cookbook left off, inspiring people from all walks of life to follow their passion no matter what the odds are. And following a year like 2020, the message hits that much harder. Just like last time, the cookbook will take another deep dive into the journey of Trap Kitchen's growth since they first made their mark in the literary world.
Malachi Jenkins and Roberto Smith are childhood friends from neighboring rival gangs, brought together by their two passions: food and girls. Today, they are the cofounders and owners of Trap Kitchen. The underground culinary experience was completely fueled off Instagram. Their colorful past has made them media darlings, having appeared on the Today show, Martha & Snoop's Potluck Dinner Party, VICE, Fox 11 News, and BET.

Having worked in some of New York's finest kitchens, from Le Bernadin to Rouge Tomate to Momofukko, over a decade in the New York restaurant scene has culminated in a versatile cooking style which reflects contributor Nicholas Porcelli's training in Asian, new American, and classical French cuisines.