Can I Mix You a Drink? BNBF (Hardcover) 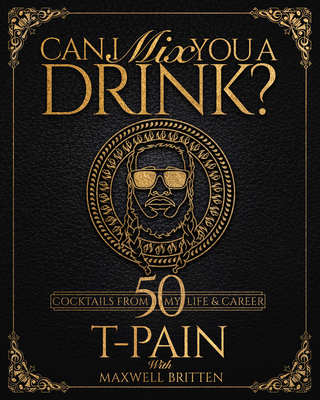 Can I Mix You a Drink? BNBF (Hardcover)


Special Order - Subject to availability
Grammy Award winning artist T-Pain brings Can I Mix You A Drink?, a liquor guide inspired by his Platinum hits, combining unique drinks with an experience that only T-Pain can provide.

In 2007, "rappa ternt sanga" T-Pain released his hit single "Can I Buy U A Drank (Shawty Snappin')," propelling the artist to mainstream royalty. Since then, the Tallahassee, Florida native has secured his position as one of the most successful and diverse hip-hop artists in the world. It all started, really, with a song about liquor. T-Pain's extensive career has been punctuated by libations. It's been a part of his music, his business acumen (having secured a number of ambassador deals with liquor brands like Jose Cuervo), and his overall persona. Now, T-Pain brings his love of mixology and music in book form, titled Can I Mix You A Drink? Working with Mixologist Maxwell Britten,  former Bar Director to Brooklyn's James Beard Award Winning Maison Premiere, T-Pain sets cocktails to music. Each drink has been carefully curated to reflect a sentiment from one of his hit songs. Drink by drink, T-Pain explores levels of new flavors (and potencies) to create a work that can be used for parties, local bars, pre-gaming before the club, or even just a quiet night at home. It's nearly impossible not to hear T-Pain's music as you read through the drinks and their unique combinations and names. Considering T-Pain is known for unorthodox mixes in his music, expect the same from his drinks, along with some classic cocktails modified by T-Pain himself. Whether you're a fan of T-Pain or a fan of drink-making, Can I Mix You A Drink? is the cocktail book for you.
•  T-Pain is a Grammy Award winning multi-Platinum recording artist, actor, and entrepreneur. Born Faheem Rasheed Najm, T-Pain has sold over 50 million records, won six Grammy Awards, and released seven albums. In 2019, T-Pain became the first winner of The Masked Singer, as the Tallahassee, Florida native aimed to show the world he was much more than the perfecter of Auto-Tune. T-Pain is also a brand ambassador, cartoon voiceover talent, podcast host, and the "dean" of Wiscansin University.

•  Maxwell Britten is an award winning hospitality professional whose occupation as an industry leader has spanned over 15 years. From his role as as former Bar Director to Brooklyn's James Beard Award Winning Maison Premiere, Chief Brand Officer to The Liquor Cabinet and most recently Managing Partner of The Django at The Roxy Hotel Tribeca, Maxwell has always been deeply passionate about innovation and community of hospitality as a means to evolve the industry.