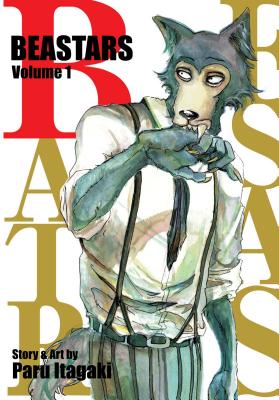 This is book number 1 in the Beastars series.

One night at Cherryton Academy, an herbivore student is brutally murdered. Among the members of the Drama Club, the herbivores’ suspicions naturally turn to their carnivore classmates… The prime suspect? Gray wolf Legoshi. But he wouldn’t hurt a fly. Or would he? Will dwarf rabbit Haru bring out the beast in him? Or are his feelings for her…something else?
Paru Itagaki began her professional career as a manga author in 2016 with the short story collection Beast Complex. Beastars is her first serialization. Beastars has won multiple awards in Japan, including the prestigious 2018 Manga Taisho Award.