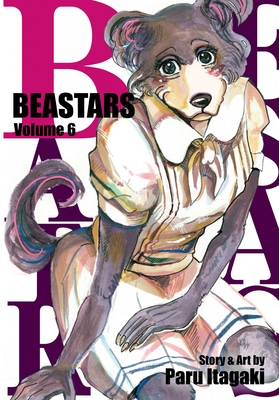 This is book number 6 in the Beastars series.

As gray wolf Legoshi and dwarf rabbit Haru’s relationship intensifies, gray wolf Juno’s jealousy grows. Red deer Louis’s mysterious absence from school has ramifications for both his friends and his enemies. And while the lion gang Shishi-gumi chooses a new leader, Cherryton Academy’s headmaster attends the Council of Living Beings to choose the school’s next Beastar. Plus, a flashback to Legoshi’s and Jack’s puppyhoods and the social engineering following the world war that led to the current fragile truce between carnivores and herbivores.
Paru Itagaki began her professional career as a manga author in 2016 with the short story collection Beast Complex. Beastars is her first serialization. Beastars has won multiple awards in Japan, including the prestigious 2018 Manga Taisho Award.