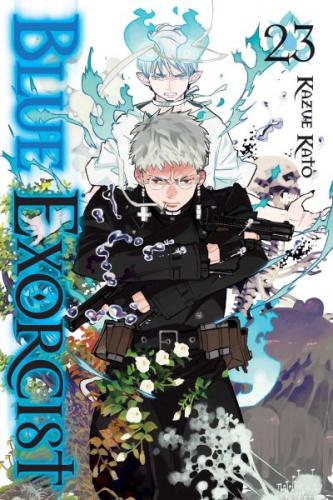 This is book number 23 in the Blue Exorcist series.

The tragic story of what happened to Rin and Yukio’s mother, Yuri Egin, continues to unfold. Yuri and Father Fujimoto were once up-and-coming young Exorcists involved in Section 13’s extensive operation to research elixirs of immortality and develop clones to house the spirits of demons. The project seemed to be moving ahead until the unexpected manifestation of a demonic spirit into one of the clone bodies. And not just any demon—the most powerful demon of all: Satan!
Manga creator and illustrator Kazue Kato was born in Tokyo on July 20. In 2000, she won the prestigious Tezuka Award for her work Boku to Usagi (The Rabbit and Me) published in Akamaru Jump. From 2005 to 2006 her series Robo to Usakichi, a sci-fi adventure featuring a rabbit (again!) was published in the monthly magazine Shonen Sirius (Kodansha).