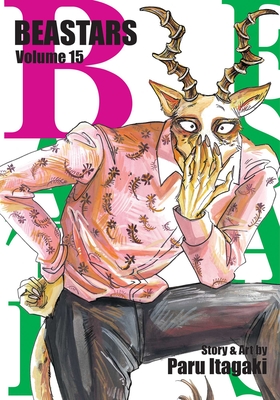 This is book number 15 in the Beastars series.

Guess who’s coming to dinner? Every rabbit parent wants their daughter to date a wolf, right? Beastar horse Yahya hires gray wolf Legoshi to help him apprehend a mixed-species felon, but Legoshi is a sucker for a sob story. At college, red deer Louis’s status has fallen from the most popular student to the limping one with the dark past. The temptation to reclaim his status as leader of the Shishi-gumi lion gang is strong…especially when he meets the beast who replaced him. Plus, more about the tragic life of Legoshi’s mother.
Paru Itagaki began her professional career as a manga author in 2016 with the short story collection Beast Complex. Beastars is her first serialization. Beastars has won multiple awards in Japan, including the prestigious 2018 Manga Taisho Award.