Call of the Night, Vol. 2 (Paperback) 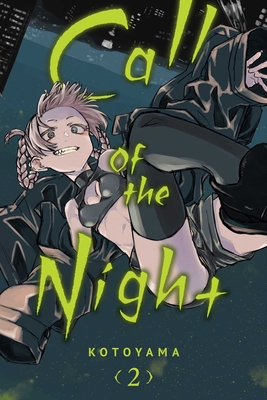 Call of the Night, Vol. 2 (Paperback)


On Our Shelves Now. Click on title for location specific availability.
Antisocial, dorky boy seeks fun-loving, sexy vampire for blood-sucking and transforming into her minion.

One sleepless night, Ko slips out to walk the streets. Life after dark is a revelation! Especially when he meets flirtatious Nazuna. Except that she’s a vampire. That’s okay. He wants to become a creature of the night too. But transformation doesn’t come that easily...

What’s the difference between desire and love? Does Nazuna know any better than Ko? What about Ko’s childhood friend Akira? Unable to answer these romantic questions, Ko and Nazuna go swimming. Turns out bathing beauties at pools are just as hot at night as in the blazing sunshine at the beach. Then, Ko gets jealous when he learns about Nazuna’s night job... But when she drafts him into temping for her, the two of them join forces to save a client from her boss—and herself.
In 2013, Kotoyama won the Shonen Sunday Manga College Award for Azuma. From 2014 to 2018, Kotoyama’s title Dagashi Kashi ran in Shonen Sunday magazine. Call of the Night has been published in Shonen Sunday since 2019.