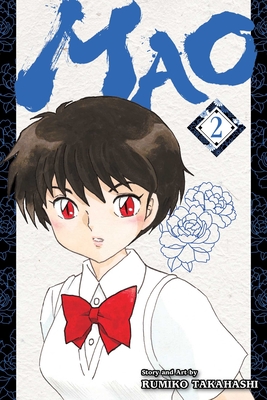 This is book number 2 in the Mao series.

Nanoka, Mao, and his helper Otoya investigate the strange cult of Priestess Shoko in hopes of bringing her to justice, but cursed dolls and scrolls of eternal life may be more than they bargained for. Will the priestess’s doomsday prophecy come true? Back in the present, Nanoka and friend-zoned Shiraha do some historical research that uncovers a cataclysmic event yet to occur in Mao’s timeline. Then Mao’s curiosity gets him on the wrong side of a group of bloodsuckers and in need of a rescue by Nanoka—again!
The spotlight on Rumiko Takahashi’s career began in 1978 when she won an honorable mention in Shogakukan’s prestigious New Comic Artist Contest for Those Selfish Aliens. Later that same year, her boy-meets-alien comedy series, Urusei Yatsura, was serialized in Weekly Shonen Sunday. This phenomenally successful manga series was adapted into anime format and spawned a TV series and half a dozen theatrical-release movies, all incredibly popular in their own right. Takahashi followed up the success of her debut series with one blockbuster hit after another—Maison Ikkoku ran from 1980 to 1987, Ranma 1/2 from 1987 to 1996, and Inuyasha from 1996 to 2008. Other notable works include Mermaid Saga, Rumic Theater, and One-Pound Gospel.