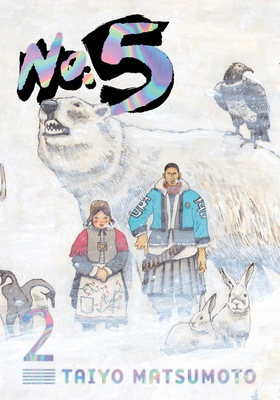 A powerfully imagined vision of the future from Taiyo Matsumoto, creator of the Eisner Award–winning Cats of the Louvre and Tekkonkinkreet.

In a world where most of the earth has become a harsh desert, the Rainbow Council of the Peace Corps has a growing crisis on its hands. No. 5, one member of a team of superpowered global security guardians and a top marksman, has gone rogue. Now the other guardians have to hunt down No. 5 and his mysterious companion, Matryoshka. But why did No. 5 turn against the council, and what will it mean for the future of the world?

The members of the Rainbow Council were created to be superior to normal human beings and to keep the peace. But with no wars to fight, what purpose do they serve other than public relations? The strange psychic twins called No. 4 use their power to try to convince No. 5 to reverse his course as he tries to stay one step ahead of his pursuers. Meanwhile, No. 1, the leader of the Council, thinks back to a bloody incident 15 years ago that bears on the present day…
Taiyo Matsumoto is best known to English-reading audiences as the creator of the Eisner Award-winning Tekkonkinkreet, which in 2006 was made into an animated feature film of the same name directed by Michael Arias. In 2007, Matsumoto was awarded the Japan Media Arts Festival Excellence Award, and in 2020 he won his second Eisner Award for the English publication of Cats of the Louvre.