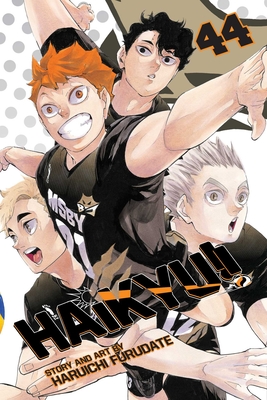 This is book number 44 in the Haikyu!! series.

Shoyo Hinata is out to prove that in volleyball you don't need to be tall to fly!

Ever since he saw the legendary player known as “the Little Giant” compete at the national volleyball finals, Shoyo Hinata has been aiming to be the best volleyball player ever! Who says you need to be tall to play volleyball when you can jump higher than anyone else?

Hinata and Kageyama finally meet again, this time in the V.League. Even amid the high-level plays between the top-tier Adlers and Black Jackals, Hinata shows off all that he can do and makes big waves on the court! Once again facing Hinata as an opponent, Kageyama watches him with growing excitement as he navigates the court.
Haruichi Furudate began his manga career when he was 25 years old with the one-shot Ousama Kid (King Kid), which won an honorable mention for the 14th Jump Treasure Newcomer Manga Prize. His first series, Kiben Gakuha, Yotsuya Sensei no Kaidan (Philosophy School, Yotsuya Sensei’s Ghost Stories), was serialized in Weekly Shonen Jump in 2010. In 2012, he began serializing Haikyu!! in Weekly Shonen Jump, where it became his most popular work to date.