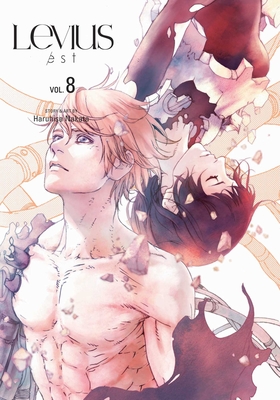 This is book number 8 in the Levius/est series.

As society rises from the ashes of war, cybernetically augmented arena fighters battle for fame and fortune…or die trying.

It’s the 19th century, and the world has entered the Era of Rebirth, recovering from the devastating flames of war. The sport of Mechanical Martial Arts has galvanized the nations. Cybernetically augmented fighters turn their blood into steam and their bodies into brutal fighting—and killing—machines.

Young Levius is one of those arena battlers, hell-bent on winning so he can simply survive.

When Oliver, the indestructible champion of Mechanical Martial Arts, attacks Levius’s body and mind, Levius must decide if the time has come for him to replace his medical prosthesis with a military-grade combat arm. A.J. risked her life in to save him, so Levius knows if he loses, it may mean more than one death…
Haruhisa Nakata began his professional manga career in 2010 with Maureca no Ki (Tree of Maureca) in IKKI, the same magazine where Levius began its serialization. In May 2015, Nakata restarted the Levius series as Levius/est in Ultra Jump.