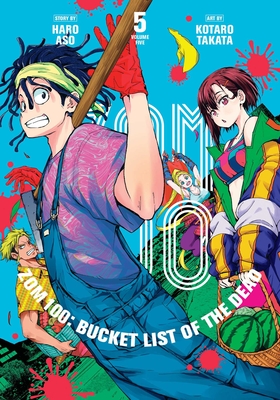 
On Our Shelves Now. Click on title for location specific availability.
Surviving a zombie apocalypse beats a dead-end job any day!

After spending years slaving away for a soul-crushing company, Akira’s life has lost its luster. But when a zombie apocalypse ravages his town, it gives him the push he needs to live for himself. Now Akira’s on a mission to complete all 100 items on his bucket list before he...well, kicks the bucket.

Looking to cross another item off his bucket list, Akira has returned to his rural hometown to show his parents the appreciation they deserve. There, he reunites with former college classmate-turned-dropout Kanta Higurashi, who’s knocking entries off a bucket list of his own. Unfortunately, Higurashi is all about getting revenge on the world that failed him. Can Akira stop his friend from destroying the fragile peace of the village?
In 2004, Haro Aso received Shonen Sunday’s Manga College Award for his short story "YUNGE!" After the success of his 2007 short story "Onigami Amon," Aso got the chance to start a series of his own—2008’s Hyde & Closer. In 2010, his series Imawa no Kuni no Alice (Alice in Borderland) began serialization in Shonen Sunday S. Zom 100: Bucket List of the Dead is his follow-up series.

Kotaro Takata first hit the manga scene in 2009 with Hallelujah Overdrive!, which ran in Monthly Shonen Sunday magazine. In 2017, he served as the artist on another Monthly Shonen Sunday title called I Am Sherlock, written by Naomichi Io. Zom 100: Bucket List of the Dead is his follow-up series.