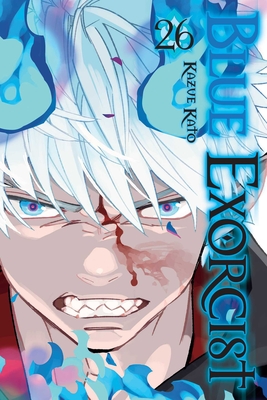 This is book number 26 in the Blue Exorcist series.

Now back in the present, and with the terrible, tragic knowledge of the truth of his and his brother’s birth, Rin confronts Yukio aboard the stricken Illuminati airship, Dominus Liminis. As the brothers face off, Satan does his best to drive them both further into his grip. Rin wants to bring Yukio back into the fold of the Knights of the True Cross, but Yukio is firm in his desire to force Rin to kill him. With the airship going down in flames, the battle for Yukio’s soul begins…
Manga creator and illustrator Kazue Kato was born in Tokyo on July 20. In 2000, she won the prestigious Tezuka Award for her work Boku to Usagi (The Rabbit and Me) published in Akamaru Jump. From 2005 to 2006 her series Robo to Usakichi, a sci-fi adventure featuring a rabbit (again!) was published in the monthly magazine Shonen Sirius (Kodansha).