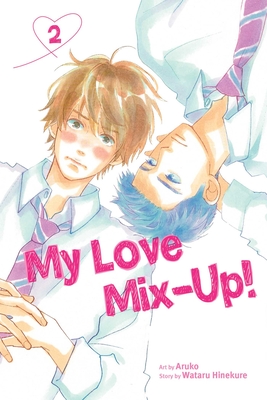 This is book number 2 in the My Love Mix-Up! series.

In this warmhearted romantic comedy, a mistaken identity leads to a blossoming romance between two boys.

Aoki has a crush on Ida, a boy in his class. Hashimoto’s eraser, which caused so much confusion among friends when Aoki borrowed it, is also at fault for making him flunk a quiz! Aoki, Akkun, and Hashimoto meet up at Ida’s for a study session where Aoki and Ida talk about what they are to each other—if they can figure it out?!
Aruko is from Ishikawa Prefecture in Japan and was born on July 26 (a Leo!). She made her manga debut with Ame Nochi Hare (Clear After the Rain). Her other works include Yasuko to Kenji, and her hobbies include laughing and getting lost.

Wataru Hinekure is a night owl. My Love Mix-Up! is Hinekure’s first work.