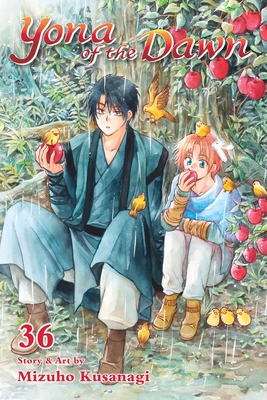 
On Our Shelves Now. Click on title for location specific availability.
A red-haired princess loses her family and her kingdom… Now she must rise and fight for her throne!

Princess Yona lives an ideal life as the only princess of her kingdom. Doted on by her father, the king, and protected by her faithful guard Hak, she cherishes the time spent with the man she loves, Su-won. But everything changes on her 16th birthday when tragedy strikes her family!

Emperor Chagol’s wily concubine Meinyan encounters Hak in a Hiryuu Palace prison cell! When Hak turns down her offer to escape together, what will Meinyan’s next move be? Meanwhile, tension mounts in South Kai, where Emperor Chagol is still waiting for Meinyan’s return from Kohka!
Born on February 3 in Kumamoto Prefecture in Japan, Mizuho Kusanagi began her professional manga career with Yoiko no Kokoroe (The Rules of a Good Child) in 2003. Her other works include NG Life, which was serialized in Hana to Yume and The Hana to Yume magazines and published by Hakusensha in Japan. Yona of the Dawn was adapted into an anime in 2014.