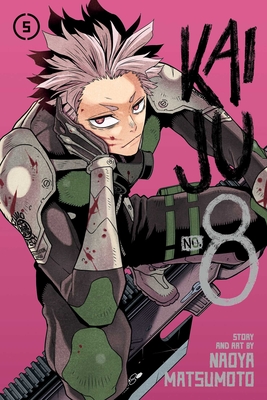 This is book number 5 in the Kaiju No. 8 series.

The Defense Force has taken Kafka into custody and plans to dispose of him. To save himself, Kafka attempts to plead his humanity to Director General Shinomiya, wielder of the mighty Kaiju No. 2’s power and the person lauded as the strongest in Defense Force history. When Kafka’s pleas fail to move the director general, he winds up facing him in combat! Can Kafka keep his kaiju form together long enough to save his own skin?
Naoya Matsumoto published his first serialized series, Neko Wappa!, in Weekly Shonen Jump in 2009. His next series, Pochi Kuro, began serialization in Shonen Jump+ in 2014. Kaiju No. 8 is his follow-up series.