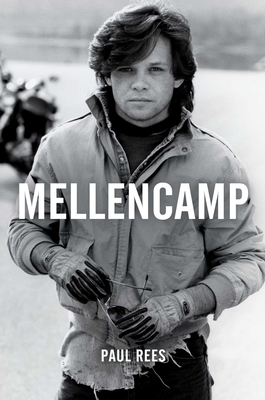 
On Our Shelves Now. Click on title for location specific availability.
The definitive biography of John Mellencamp, the iconic American rock and roll original, featuring exclusive in-depth interviews and never-before-told details. Perfect for fans of Janis and Born to Run.

John Mellencamp is not your typical rock star.

With music inspired by the work of William Faulkner, John Steinbeck, and other giants of American literature, he has experienced a colorful career unlike any other. Now, this fascinating biography fully charts the life of one of this country’s most important voices in American music.

Mellencamp’s story is also the story of the American heartland. His coming of age as an artist and evolution into legendary status directly reflected the major changes of the last fifty years. From the Summer of Love to the growing divisiveness of American politics and beyond, his music has served as the backdrop to this evolving country for millions of fans.

Featuring exclusive interviews with friends, family, and colleagues, and exploring everything from the founding of Farm Aid to his induction into the Rock and Roll Hall of Fame, this is a fresh and expansive look at a true original.
Paul Rees has written about music for over twenty years. In that time, he has interviewed everyone from Paul McCartney, Bruce Springsteen, and Madonna to Bono and AC/DC. Rees is the author of Robert Plant: A Life, and served as Editor of two of the United Kingdom’s most successful and long-standing music publications, Q and Kerrang!. He lives in Scotland.
"Woody once said “Music is a handy way of saying what’s on your mind. No mind. No music.” John Mellencamp not only has a mind, but better yet, he’s got a mind of his own. He’s not a card carrying anything. Like my father who grew up in Oklahoma, John started out as a son of the mid-west, heir to generations of farmers who passed down ways to fight all kinds of catastrophes, both natural and man-made; first with a fist then with a voice. My father traveled a similar road in Oklahoma, learning the skills of fist-fighting and later as voice-fighting. Early on, power rested with the strongest punch. For John, the power of the punch also transformed into the power of song. This book is his unique tale, tracing his journey to become an international rock star, an honored songwriter, a serious painter, and a spokesman for small farmers, civil rights, and a slew of other righteous causes. It takes a fighter to achieve all this, and fighters are often hot headed, impulsive and laser focused on their sense of right and wrong. Their punches are meant to land and fall their opponents; Injustice, Racism, and even Capitalism itself. My father sang, “When I was a little boy, first I had to grow. Then I had to guess. Then I had to know. But I had to study fighting most of all.” Heck. Someone’s got to be in the fray. Someone’s gotta be the one not to be afraid of anything or anyone. From a lifetime of searching for clues trying to understand what makes this world tick, it seems his mid-west roots only served to strengthen him for the job. His tale is inspirational, prodding all of us to flex our own muscles for righteous causes, without fear or hesitation." —Nora Guthrie, musician and president of The Woody Guthrie Foundation

"John Mellencamp’s journey is a true coming of age story of an uncompromising Midwestern rebel who fought the star making machinery to achieve music icon status on his own terms. Paul Reese guides us through the life of an artist born with a rare combination of God given talent and tireless work ethic, who overcomes countless external and internal headwinds to become one of the great American voices of our time." —John Sykes, President of Entertainment Enterprises for iHeartMedia and Chairman of the Rock and Roll Hall of Fame Foundation

"His songs have been compared to Springsteen's and his paintings displayed with Rauschenberg's. That's John Mellencamp. Mellencamp has gone from stone-broke in Seymour to the footholds of Guthrie and Steinbeck. In this colorful biography, Paul Rees lets Mellencamp and his companions tell how the American maverick got there." —Ted Cady, chair for the John Steinbeck Award, Cox Center for Steinbeck Studies, San Jose