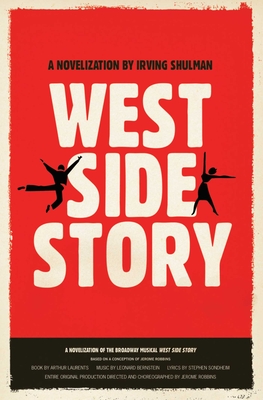 
On Our Shelves Now. Click on title for location specific availability.
The classic novelization of one of Broadway’s most enduring and beloved musicals, updated with a beautiful new cover.

Maria is young and innocent and has never known love—until Tony. And Tony, searching for life beyond the savagery of the streets, has discovered love for the first time with her, too.

But Maria’s brother is the leader of the Sharks and Tony had once led the rival Jets. Now, both gangs are claiming the same turf and with tensions rising to the point of explosion, it seems there is no way to stop a rumble.

Tony promised Maria that he would stay out of it. But will he be able to keep his word or will their newfound love be destroyed by violence or even death?

Evocative and unforgettable, this novelization brings out all of the depth, drama, and beauty of one of the most enduring stories in the history of American theater.
Irving Shulman (1913–1995) was a novelist and screenwriter, known for his depictions of urban life. He is the author of ten books, including the novels The Amboy Dukes, Cry Tough, and The Square Trap, which were all adapted into movies. Shulman also wrote the original treatment for Rebel Without a Cause, the film that shot James Dean to stardom.