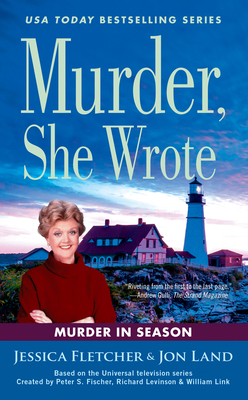 This is book number 52 in the Murder She Wrote series.

“This appealing—if murder-prone—world is a splendid place to spend a bit of the holiday season.”--Publishers Weekly

Christmas has come to Cabot Cove, but a peaceful holiday season is not in the cards after Jessica Fletcher is pulled into a centuries-old mystery in the latest entry in this USA Today bestselling series.

With work on the reconstruction of her beloved home almost complete, Jessica Fletcher is in high holiday spirits, spearheading the annual Christmas parade and preparing for her nephew Grady and his family to come to town. The only thing dampening the holiday cheer is the discovery of two sets of bones on Jessica’s property: one set ancient, the other only about a year old. It’s concluded that they were both placed there during the reconstruction, and Jessica suspects that, despite the centuries between them, the remains might be connected.

Soon tabloid reporter Tad Hollenbeck arrives in Cabot Cove to write a story about what he calls “the murder capital of the country.” But when Tad himself is murdered, Jessica speculates that his arrival, his death, and the discovery of the bones are all somehow linked.

As Jessica digs deeper to find the connection between the bones and Tad’s murder, everything seems to come back to a mystery that has long plagued Cabot Cove. If she wants to solve the case, she’ll need to delve into her beloved town’s dark history, or else this holiday season may be her last....
Jessica Fletcher is a bestselling mystery writer who has a knack for stumbling upon real-life mysteries in her various travels. Jon Land, author of more than fifty books, coauthors this bestselling series.
Praise for Murder, She Wrote: Murder in Season


"A nice diversion for readers living in a world where a pandemic dominates both headlines and our nightmares, and gives us a great story of hope and Scrooge-like redemption to warm us on the cold winter nights to come."--Bookreporter

"A well-crafted and pleasing whodunit.... MURDER IN SEASON is a solid mystery filled with nostalgia and holiday warmth, and it is Land's most endearing entry in the 'Murder, She Wrote' canon."--Press-Republican

“Cozy as a warm blanket as Jessica Fletcher hunts down yet another killer with her customary panache.”--Kirkus Reviews