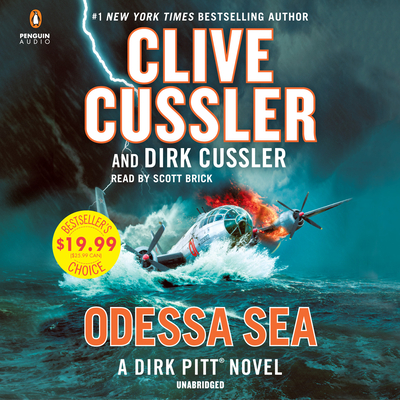 This is book number 24 in the Dirk Pitt Adventure series.

Dirk Pitt—“oceanography’s answer to Indiana Jones”*—responds to a Mayday signal from a deserted ship and gets drawn towards a deadly Cold War secret in this thriller in Clive Cussler’s #1 New York Times-bestselling series.

Dirk Pitt, the director of the National Underwater and Marine Agency, is on the Black Sea, helping to locate a lost Ottoman shipwreck, when he responds to an urgent Mayday—“Under attack!”—from a nearby freighter. But when he and his colleague Al Giordino arrive, there is nobody there. Just dead bodies and a smell of sulfur in the air. As Pitt and Giordino explore, a blast from the stern scuttles the ship swiftly, almost taking them with it.

The more the two of them search for the secret of the death ship, the deeper they descend into an extraordinary series of discoveries. A desperate attempt in 1917 to preserve the wealth and power of the Romanov Empire. A Cold War bomber lost with a deadly cargo. A brilliant developer of advanced drone technology on an unknown mission. Modern-day nuclear smugglers, determined Ukrainian rebels, a beautiful anti-terrorism agent from Europol—all will combine to present Pitt with the most dangerous challenge of his career.

And not only Pitt. His two children, marine engineer Dirk and oceanographer Summer, are exploring a mysterious shipwreck of their own, when they are catapulted into his orbit. The three of them are used to perilous situations—but this time, they may have found their match.
Clive Cussler is the author or coauthor of over fifty previous books in five bestselling series, including Dirk Pitt®, NUMA® Files, Oregon® Files, Isaac Bell, and Sam and Remi Fargo. His nonfiction works include Built for Adventure: The Classic Automobiles of Clive Cussler and Dirk Pitt, and Built to Thrill:More Classic Automobiles from Clive Cussler and Dirk Pitt, plus The Sea Hunters and The Sea Hunters II; these describe the true adventures of the real NUMA, which, led by Cussler, searches for lost ships of historic significance. With his crew of volunteers, Cussler has discovered more than sixty ships, including the long-lost Confederate ship Hunley. He lives in Colorado and Arizona.


Dirk Cussler is the coauthor with Clive Cussler of six previous Dirk Pitt® adventures: Black Wind, Treasure of Khan, Arctic Drift, Crescent Dawn, Poseidon’s Arrow, and Havana Storm. For the past several years, he has been an active participant and partner in his father’s NUMA expeditions and has served as president of the NUMA® advisory board of trustees. Cussler lives in Arizona.
PRAISE FOR ODESSA SEA

“The pages whip by as the characters, at least the good guys, survive one deadly encounter after another, and the bad guys get their comeuppances. Readers will anxiously await Dirk’s next adventure.”—Publishers Weekly

“Sketch out some exotic, ephemeral settings, make every villain as nasty as possible, and it's another of Cussler's cinematic-style entertainments spinning out at hold-on-to-your-hat speed.”—Kirkus Reviews

PRAISE FOR THE DIRK PITT ADVENTURES

“Exotic locations, ruthless villains, and many narrow escapes and derring-do. Cussler’s fans come for swashbuckling [and] he delivers.”—*Associated Press

“Another super Cussler fun read. Pitt and company are the stuff of heroic dreams.”—Kirkus Reviews

“Teems with violence, derring-do, and perilous situations. The action runs non-stop and wham-bam, with the authors finding clever ways to spare their good guys from bad ends.”—St. Louis Post-Dispatch